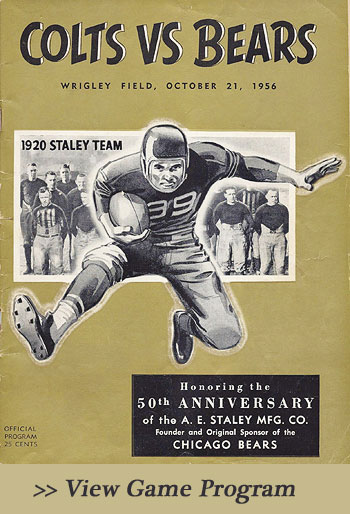 The year was 1956 and the Staley Mfg. Co. was preparing to celebrate its Golden Anniversary.  There were many reasons to celebrate – the company was a success in both its corn and soybean processing, A.E. Staley, Sr. was recognized as a leading citizen for his many successful contributions to the community of Decatur, and, perhaps most significantly, World War II was over and the country was recovering both economically and in sprit.  This was a golden opportunity for Staley Mfg. to do something on a grand scale.

Golden Anniversary and the Chicago Bears

Letters were written, phone calls were exchanged and the decision was made to plan an event focused on the Staley connection with the Chicago Bears.   The celebration would include not only the company’s history and successes but also recall that glorious year when A.E. Staley dove head first into the world of sports and created a football team that grew with a momentum of its very own and became a definitive presence in the newly founded National Football League.

James H. Beaumont, director of public relations, was put in charge of organizing the event.  Beaumont said that this day would be a reminder that A.E. Staley was not only a pioneer in starch and soybeans but also in professional football.   Staley Day at Wrigley Field was going to be an event to remember.

The date chosen for this celebration was October 21, 1956.  The Bears were scheduled to play the Baltimore Colts.  This, too, was a fitting tribute to the company, which was first founded by A.E. Staley in 1897 in Baltimore, Maryland. (Note, the 50th anniversary takes 1906 as the foundation date when Staley bought the defunct processing plant in Decatur and began processig corn for himself instead of buying starch from other suppliers) 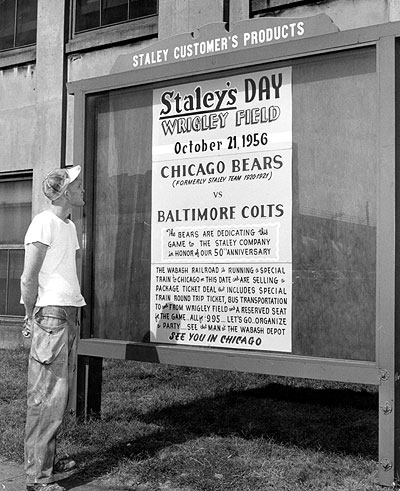 Staley Employees Enjoyed an All-Inclusive Trip to Chicago for Just $9.95

Among the preparations that were made was an arrangement with the Wabash Railroad to provide a special train to transport  500 Staley employees and family to and from the game, with bus transportation arranged to take everyone from Dearborn Station in Chicago to the Wrigley Field and then back again.  An additional passenger coach was added to the train to transport the University of Illinois marching band.  Also, everyone would have a reserved seat at the game.  All this for the incredible price of $9.95!

A Day to Remember

For the Chicago Bears, this was a day to celebrate not only the company that gave them their start but the history and the foundation of the football league and game they loved.  George Halas spent the day nostalgically recalling the early days when he was coaching and playing for that first team and A.E., Sr. would cheer from the sidelines.  The halftime ceremony was one to be remembered by all.  Many of the original team players were present and were called down to be honored on the field.  George Halas and A.E. Staley, Jr. (Gus) spoke to the crowded stadium.  The University of Illinois marching band played and marched into a formation spelling out the name STALEY.

The reminiscences of James H Beaumont are recorded in Dan Forrestal’s book The Kernel & The Bean.   “It was the biggest all-out binge in Staley history.  George Halas kept saying, “if it weren’t for the Decatur Staleys there never would have been a Chicago Bears.”  Nostalgia prevailed.  We celebrated going up to Chicago, we celebrated while we were there, and we celebrated coming back.  I doubt if any company ever had such an uproarious event for its golden anniversary.  It was the talk of the town for a long time.”
Photos below are property of Tate & Lyle and used by permission