The Staley-Mueller connection was established by two marriages in the 1920’s. 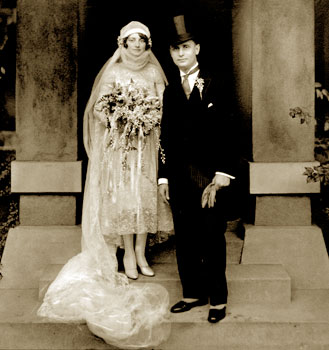 Lenore Charlotte Mueller was wedded to A.E.Staley, Jr. in 1926

The second marriage followed two years later in 1926 with Lenore Charlotte Mueller, daughter of Henry and granddaughter of Hieronymus, marrying A.E. Staley, Jr. Much attention was given to this second wedding in the Decatur community. It was considered one of the most beautiful weddings seen in Decatur. Ebert and Ruth served as best man and matron of honor for A.E. and Lenore. A.E. “Gus” Staley, Jr. had taken over his father’s position as President of A.E. Staley Manufacturing Company in 1925, serving in this role until 1958. A.E. Staley, Sr. remained as Chairman of the Board.

At present no photographs are available of the Ebert and Ruth Staley Mueller wedding. They were married in the Staley family home on College Hill, the present location of the Staley Museum, in Decatur on June 25, 1924. Over 300 guests were in attendance. The wedding of A.E., Jr. and Lenore is more richly documented both photographically and textually. Many articles appeared in local papers and photographs were taken of Lenore in her elaborate wedding dress. Photographs were also taken of the entire bridal party both bridesmaids and groomsmen and were also published.

With these two weddings, the families of two of Decatur’s most successful industrialists came together in this union to share not only a common genealogy but also a shared pride in the history and accomplishments of both companies.