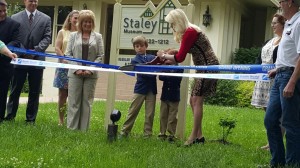 Now that their exhibits are complete and a sign has been put up, the Staley Museum was officially welcomed to Decatur by the Greater Decatur Chamber of Commerce Tuesday.

The Greater Chamber held a ribbon cutting Tuesday afternoon – a month and a half after the Museum opened their doors to the public.  The museum highlights the life and impact of the A.E. Staley family to the Decatur area.  City of Decatur Economic Development Officer Patrick Hoban spoke on behalf of the city, thanking the Staley’s for their impact.

“We are grateful for the Staley heritage and their investment in Decatur,” Hoban says.  “You can see his mark all over the city.  My favorite A.E. Staley quote was ‘Big men don’t do small things’ and that really shows because he has accomplished a lot for his company and Decatur.”

Museum Board of Directors President Julie Staley says attendance has been great so far and they continue to see new visitors every week.

“This has been really overwhelming,” Staley says.  “People really see this as their home and that’s exactly what we wanted them to feel like.  Without the people in Decatur, this house wouldn’t be here because there wouldn’t be a company.”

Staley says they have been receiving items with a connection to the Staley family that will eventually be put on display.  She says it is pretty cool to see people connect the dots and help complete a story.

“It’s amazing once you open up the door and see how many more people have items that would fit in the museum,” she says.  “They come in and see something on display and find they have the missing link for that story.  We’ve had people bring in photographs and memorabilia that can complete or add to a story.”

The exhibits haven’t changed much yet, but Staley promises new items will be put on display throughout the summer.

The Museum is hosting Decatur’s first ever American Heart Association “Go Red for Women” luncheon at the museum this Friday, June 3 at noon.  On July 17, the Museum will hold a special day to honor all retirees and former Staley employees.  Those employees will get free admission to the Museum for the day.