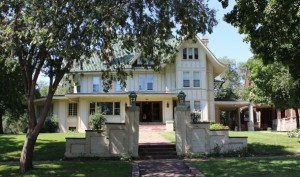 The life of the A.E. Staley family is now on display at the new Staley Museum in Decatur’s historic downtown.

The Staley Museum Foundation has officially cut the ribbon on the museum, located in a home the Staley’s occupied at 361 N. College Street.  Staley Museum Board of Directors President Julie Staley says visitors will see a wide range of items spanning the Staley’s life.

“There are so many items on display here – something that everyone would enjoy,” Staley explains.  “There are a lot of things about A.E. as a person – some of the things he liked and would have enjoyed at home.  A lot of items are dedicated to his wife, Emma Staley, because she was the woman who kept the family and this house going.”

The building has its own history, Staley says, so there are plenty of things that tell the story of the home.  The Staley Manufacturing Company, along with Tate & Lyle has a large presence at the museum as well.  A room is also dedicated to the Staley company sports teams including the Decatur Staleys, which eventually turned into the Chicago Bears.

Eric Stuhler grew up just down the street from the museum in the once E.A. Gastman House.  He remembers running around the neighborhood as a kid, but never getting to see the inside of the historic home – until now.

“It’s very nice to see inside the home instead of peeking through the windows,” Stuhler says.  “It’s good to see revitalization in this area and the house is magnificent, so I’m happy something like this was done in the neighborhood.”

Stuhler drove up from St. Charles, Missouri for the grand opening.  He says he plans to come back sometime soon with his whole family.

“I grew up with the aroma of the Staley plant,” he says.  “They were a very important family for the area and I’m glad they are being recognized as such.”

“It’s been crazy, but the good crazy,” Staley says.  “We have people that have driven so far to see the museum and that’s really touching.  We are happy to see such an interest in the history that is on display here that many of them may have been a part of.”

Staley says there is plenty of opportunity for the future of the museum.  She says they have hundreds of items in storage and they are receiving plenty more as visitors come to share their connection.  The Staley Museum will routinely change as exhibits are swapped out with different items.

Free admission on opening weekend continues until 5 p.m. Saturday, and hours on Sunday are 1-4 p.m.  Regular hours will be Tuesday thru Saturday, 1-4 p.m. and the museum will also be open on the last Sunday of every month between the months of March and November.