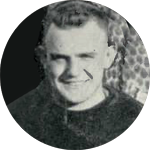 Burt Ingwersen was born on a farm in Deep Creek Township in Clinton County, Iowa. “Aherns” was his mother Amelia’s maiden name. His parents moved to Fulton, in Whiteside County, Illinois when he was in grade school. Since Fulton high school had no football team, Burt crossed the Mississippi River for four years to play sports at Clinton High School in Iowa. He then enrolled at the University of Illinois and was sometimes referred to as the “Fighting Swede” while he played baseball, captained the 1918 basketball team and was an All- Conference tackle on the 1918 and 1919 football teams. He graduated in the spring of 1920 with 9 varsity letters and a degree in engineering. Ingwersen later related that football coach Bob Zuppke had only ever given him one compliment his whole college career. Burt was knocked out on a play in the last game of the 1919 season as the U of I defeated Ohio State for the national championship. When he came to Zuppke said, “Burt, you’re the best tackle I ever had.”

Perhaps because he had played on several teams at the U of I with both George Halas and Dutch Sternaman, Ingwersen was recruited to come work for Staleys in the “Table House” and play on the 1920 football team. He started and played in 12 of the 13 games that season. In addition to his regular salary for working in the Staley plant, he made more than $1600 for his football work. In 1921 he went back to the University of Illinois and coached the freshmen football team as well as coaching some baseball before becoming Zuppke’s assistant.

On September 1, 1924 he married Edith Kohl of Centralia, Illinois.
A few days later Ingwersen became the head football coach at the University of Iowa in Iowa City. At age 26 he was the youngest head coach in the nation. Many Hawkeye alumni were not happy by the selection of someone so young who had betrayed his Iowa high school fans by going to college in Illinois. In response, the secretary of the Iowa athletic control board wrote:

After 8 years as head coach he resigned under pressure from alumni on December 11, 1931 saying, “I no longer care to fight the critics who are now or will be asking for a new coach at Iowa.”

A month later he signed on as assistant football coach at Louisiana State University in Baton Rouge, Louisiana at a salary of $7,500. After three years at LSU he became an assistant coach at Northwestern University in Evanston, Illinois in 1935. On February 11, 1943 he was sworn in to the U. S. Naval Reserve and served as a Lt. Commander and the athletic director at the pre-flight school at Chapel Hill, North Carolina. Within days of being released from the service in September 1945 he reunited with his old Staley teammate Leo Johnson as an assistant football coach at the University of Illinois.

Ingwersen was using a cane to get on and off the Illini field when he reached the then mandatory retirement age of 68 in August 1966. Three years later he had a heart attack and died in Urbana at the age of 71. During his 20 years back at the University of Illinois he spoke at dozens of sports banquets all over his adopted state. He is buried in the Elmwood Cemetery in Centralia, Illinois. His nephew is well-known portrait artist James Jay Ingwersen of Door County, Wisconsin.