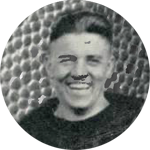 This 1964 NFL Hall of Fame inductee was usually known as “The Beast,” but was also referred to as “The Brute,” “The Big Bear” and “The Cyclone.” Playing center for the Staleys at Rock Island in a 1920 game, legend has it that he personally put four opponents out of the game in the first 12 plays, including breaking one player’s leg against a nearby fence. His later Bears’ teammate, Red Grange, called him the “toughest, meanest, most ornery critter alive.”

Trafton was raised on Chicago’s west side and played football at Oak Park High School under the legendary Illinois coach Bob Zuppke. He graduated in 1916 and then worked; life guarded at the Lake Michigan beach and played semi-pro football until he enlisted in the Army in 1918. He was stationed at Camp Grant in Rockford, Illinois and captained the base football team. In the fall of 1919 he enrolled at Notre Dame University and played center on the same team as George Gipp. In January of 1920, while the starting center on the basketball team, he was expelled from school by the school’s athletic board of control after coach Knute Rockne discovered that Trafton had played for money that fall under assumed names with two professional football teams. By the summer of 1920 he was recruited by George Halas and given a job at Staley’s.

In 1920 he started every game at center for the Staleys and the following season missed just one game due to injury. After taking 1922 off, Trafton was the starting center for the Chicago Bears for the next ten seasons. Perhaps because he had no index finger on his left hand, he was credited with being the first offensive center to snap the ball with only one hand, and the first defensive center to rove around. Late in life he told an interviewer that his offensive duties were boring and that he just usually fell flat on his stomach after snapping the ball. But he loved playing on the other side of the ball as he said, “You could really find the action on defense.” Back in the early days of professional football, when few penalties were called, one reporter stated that Trafton was strongly disliked in every city in the NFL except Green Bay and Rock Island. “In those places, he was hated.”

To supplement his meager football earnings entering the Great Depression, Trafton participated in five professional boxing matches during the winter of 1929-1930. He made several thousand dollars crushing White Sox first baseman Art Shires in front of 5000 spectators in Chicago on December 16, 1929 before the two went night-clubbing together after the bout. After three more victories, “The Big Bear” met future world heavy weight champion Primo “The Ambling Alp” Carnera in Kansas City on March 26, 1930. The fight lasted only 50 seconds as Trafton went down 3 times in the first round. After receiving his $2,500 pay day, the Missouri boxing commission banned Trafton for life for not trying hard enough. “The Beast” years later told interviewers that he was basically told at gun point in the dressing room before the fight to make sure he didn’t win.

After retiring from playing football in 1933 at the age of 37 he did some coaching with the Bears and then moved on to Green Bay as a line coach in 1944. The Packers press book reported at the time: “Green Bay fans never liked Trafton when he was with the Bears because they saw him as a truculent, blustery competitor who tried to arouse their contemporaries. Now that he is with the Packers, they can see the result of his hard-driving will to win. He uses every opportunity to show his charges what his experience has told him is the proper way to win.”

Trafton next became the offensive line coach with the Cleveland Rams in 1945, moved with them to Los Angeles in 1946 and stayed until the completion of the 1949 season. From 1951 through 1953 he served as the head coach of the Winnipeg Blue Bombers in the Canadian Football League. [Future Bears’ head coach Neill Armstrong was a member of his first squad.] By the mid-1950s Trafton was back in Los Angeles, this time as a real estate agent.

In 1971 “The Beast” had hip surgery to repair damage he said was done while playing for the Bears. He died in a convalescent hospital on September 5th in Los Angeles. The man who had no fear in wearing number 13 his whole career was buried at Holy Cross Cemetery in Culver City, California on September 13th after a graveside mass. He was 74 years old. According to 1920 Staley teammate NFL Hall of Famer Jimmy Conzelman, “Trafton was the only guy who claimed he was the world’s greatest at his position and actually was.”