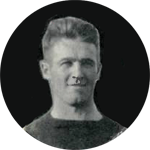 This is the “guy” that crimped the Kansas Farmers;
And trampled on the Michiganders’ hopes;
This is the “guy” that kinked the cunning Hawkeyes,
And shoved the shivering Jayhawks through the ropes.
If you boast about the Huskers, and a stranger asks you why,
Just point to Mr. Chamberlain and murmur “He’s the Guy!”

Guy Chamberlin was born on a farm near the Gage County village of Blue Springs in the southeast corner of Nebraska. According to family lore, his farmer father dropped the “a” from their last name in order for it to look and fit better on their grain sacks. This entrepreneurial action however did not stop university yearbooks and later the Staley Journal and Decatur press from always misspelling his name.

In 1911 and 1912 Guy attended Nebraska Wesleyan University and was a star left half back on the Coyotes [now “Prairie Wolves”] conference champion football teams. Recruited to move over to the University of Nebraska, he sat out the 1913 campaign before becoming part of Coach Ewald O. “Jumbo” Stiehm’s “Stiehm-Rollers” which won 15 and tied one game during “the Champ’s” two years as a Husker. Chamberlin earned All-Missouri Valley Conference honors as a halfback in 1914 before earning All-America honors as an end in 1915 when the team captured the Missouri Valley Conference title.

On October 23, 1915, Chamberlin made a lasting impression on Notre Dame Coach Knute Rockne when he scored touchdowns on runs of 20 and 10 yards and threw a 35-yard pass for the winning score beating the Fighting Irish 20-19. All in all, Chamberlin scored nine touchdowns his first year at Nebraska and 15 his second season. He also impressed teammates by being humble and sharing the credit. In 1962 Guy was inducted into the College Football Hall of Fame in South Bend, Indiana, but said it was only because of his great blockers. “Dick Rutherford was the standout. But while Dick had more guts than I had, I was a little faster and Jumbo Stiehm made him the workhorse and gave me the glory.”

After graduating from Nebraska, Chamberlin stayed in state and taught high school science and coached in Lexington until going into the U.S. Army from 1918 to 1919. Lt. Chamberlin served part of this tour as the athletic director at Camp Kearney in California .

On January 3, 1919 he married Lucile B. Lees, the daughter of the University of Nebraska Provost. That fall he played football for his idol, Jim Thorpe in Ohio on the independent Canton Bulldogs and twice traveled to Cubs Park in Chicago to play against George Halas and the Hammond All Stars. Perhaps it was Chamberlin who broke opposing end Halas’ collarbone in Canton’s November 27 win, thus making a lasting impression on him. The following fall Halas heavily recruited the talented Nebraskan [now an Ohio insurance agent] to come work and play for Staley. Whatever Halas promised must have worked as Chamberlin signed a contract on October 5, 1920, and even though he didn’t play in the first game and scored no points that season, he was paid more than any of the other players.

After the football season Guy kept working at the Staley plant as he played basketball with several teammates and starting in April 1921 played on the baseball team with Halas. He also placed in several events on September 17 in the 2nd Annual Staley Track & Field Meet. Legend says he once ran the 100 yard dash in 10 seconds flat. That fall Chamberlin started all 12 games at left end and scored 3 touchdowns. None was bigger than his interception and 90-yard run back in Cubs Park on December 4, to defeat the Buffalo All-Stars to clinch the National Championship, his first of five as a player.

In 1922 Chamberlin returned to Canton as a player-coach and over the next two years the Bulldogs went 24 games without a loss and won the first NFL back-to-back championships. Although he later said, “I love the game. That’s why I play it. I might make more money in some other line of endeavor so it is not the ‘sugar’ that keeps me at it,” he also remembered that he got paid $7000 for those two seasons!

The Bulldogs relocated to Cleveland in 1924, where Coach Chamberlin played in all nine games while winning a third consecutive NFL title. [They split their home and home games with the Bears.] When the Cleveland franchise had financial difficulties he moved on to Philadelphia and become the player-coach of the Frankford Yellow Jackets. After a sixth-place finish in 1925, the Yellow Jackets rolled to a 14-1-1 record in 1926 to give Chamberlin his fourth NFL championship in five seasons as a coach.

In 1927 he finished his professional career as player-coach for the not very good Chicago Cardinals. He did however, frequently get to see his former Staley teammates, Halas, Sternaman, Trafton and Driscoll who were all now crosstown rivals with the Bears. As a side note to that season, Chamberlin coached and started lineman Duke Slater in every game, the only African-American in the entire NFL that year. [Slater was born in Normal, IL and after his sports career broke many racial barriers as a jurist in Chicago.]

Retiring from coaching and playing, Chamberlin lived in East Cleveland, Ohio with his wife and daughter Patricia and worked as a salesman. As the Great Depression deepened he returned to his beloved Blue Springs in 1932, where he became a farmer and stockman. His last sports work may have been as high school football coach for the Wymore Zephyrs in 1939. He and Lucile divorced and he quit farming in 1940 and bought a tractor dealership. In 1941 he married Bernyce Weeks and in the 1950s they moved to Lincoln where he worked at the State Reformatory while Bernyce became an interior decorator.

In 1962, in addition to his College Hall of Fame honors, the Reformatory named its football field in his honor. On September 12, 1965 he was admitted into the NFL Hall of Fame, the fifth Staley player elected. His official professional coaching record was 58 wins -16 losses-7 ties. Nicknamed “The Champ” during his college career, he was also named to the 1920’s NFL “All-Decade Team” and in 1971 to the Nebraska Football Hall of Fame.

After his death in 1967 his ashes were spread around the fields of his home town. Shortly thereafter, the Nebraska football program established the Chamberlin Trophy, presented each year “to the senior player who has shown by the play and contributions to the betterment of the University of Nebraska football squad that he has the qualities and dedication of Guy Chamberlin to the Cornhusker tradition.”

On August 15, 2014, the citizens of Blue Springs dedicated a 4-foot red granite marker to his honor near the site of the original Blue Springs High School. A school that was too small to have a football team when “The Champ” was a student.