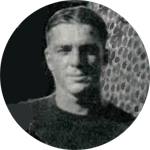 Harry Englund was different than the average Staley football player.  He was the only Staley not born in the 19th Century; the only player from Rockford; and one of the few men who hadn’t attended college nor been in the armed forces before joining the team.

Harry grew up in Rockford the youngest child of Scandinavian immigrants.  He was a star athlete on the high school’s football and basketball teams.  He was nicknamed “Fat” his freshman year as the school yearbook prophesized, “Harry Englund promises to be a great athlete, not only in football but in other sports as well.”  Although the 1918 football season was cut to just five games in order to avoid crowds during the flu pandemic, the now christened “Skin” Englund was given all-state honors as his team went undefeated and outscored opponents 163-0.  He was also named to the 1919 first team all-state basketball squad as Rockford beat Springfield in March for the state championship with Harry as the captain.  The yearbook staff opined, “Never have any set of men had a finer man to work under, and ‘Skin’ will be missed by the entire school next year.”  [Decatur sports writer Howard V. Millard thought the “Skin” appellation came from this heavyweight not really being “Skinny”.]

In 1919 and 1920 Englund played on local AAU basketball teams and in the fall of 1920 he played right end for the Rockford Amateur Athletic Club football team.  Rockford defeated six area teams that year by a combined score of 109-8.  However, when the Decatur Staleys came up to Kishwaukee Park on Halloween the Rockford squad was squashed 29-0.  According to Staley publicist Millard, “Skinny got his break when the Staley team visited … ‘Furniture City,’ to play an All- Star group.   Englund played such a whale of a game at end against the starchworkers that George Halas induced him to come to Decatur.”

The following September Englund showed up in the Soy City as the Decatur Herald reported, “Englund is a big, strong and fast player who is expected to be a star in the ‘big league’ grid game.” In October he subbed for Halas in the first game of the season, Harry’s only game played on Staley Field.  When the teamed moved to Chicago that year Englund subbed in four more games at end and in the backfield as the team won the professional championship.  Each player received $25 per week from Mr. Staley as well as a portion of the gate receipts.

In 1922 he joined the Bears as the youngest player on the team and started three of the eleven games he entered.         After the season he returned to Rockford and played several years of club basketball.  On September 1, 1923 he married Murrell Genevieve Anderson and in 1928 their only child Mary Lou was born.  He played several years of amateur basketball while working at the Empire Furniture Manufacturer before taking a job at his father-in-law’s grocery store until 1940.  He then worked until retirement at the Mattison Machine Works.

Englund attended the October 1956 Staley anniversary reunion at Wrigley Field and was photographed lighting a cigar for Tarzan Taylor during the half-time show.  Little is known of his later life but hopefully he got to enjoy playing with his grandsons Dave and Chuck Abramson in his beloved Rockford.