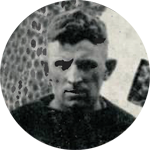 Jack Mintun was the backup center and defensive middle guard for the 1920 and 1921 Decatur/Chicago Staley football teams. When repeatedly asked over the years why he didn’t continue on with the Bears in Chicago he always replied, “This was my home and I worked here.” Yet, Mintun went on to play in 30 other NFL games with Racine and Kansas City from 1922 to 1926. He did however stay a loyal Staley employee for 42 years retiring in 1962. After his death in 1976 Decatur sports Editor Forrest R. Kyle wrote: “Jack retained his robust build through the years …and it wasn’t hard to understand why the celebrated Jim Thorpe once said that the Staley linemen hit him harder than any other foes.”

Little is known of Mintun’s youth other than he spent his childhood in Piatt County, Illinois before his family moved to Decatur in time for him to attend high school. At age 18 he was the starting center on one of the town’s independent club football teams and is first mentioned as “Jack” in the local paper in November 1915 when he scored the lone touchdown for Decatur’s “Indians” club team thus defeating the Decatur “Athletics” for the city’s independent football title. Before World War I, Jack worked as a driver for the Decatur Model Laundry while playing baseball and football for several local club and industrial teams, as well as becoming one of the best bowlers in the city. On May 10, 1918, while on the Staley club baseball team with Charlie Dressen, Mintun was drafted into the U.S. Army. As they did with many local boys, the Decatur papers followed Jack’s infantry service from Jefferson Barracks in St. Louis to Camp Shelby in Mississippi to Camp MacArthur in Waco, Texas to France with the 34th Infantry in September. He was discharged on June 26, 1919 and two weeks later was back playing baseball with the Staley nine under player/ manager Joe McGinnity.

That fall he was playing center and placekicking for the Staley Fellowship football team and was captain of the Staley bowling team. In 1920 he started working full time for Staley’s as a millwright before becoming the plant’s long-time night supervisor in 1932. He also became the backup center for George Trafton on the first two Staley professional football teams [Mintun started for the injured iron-man Trafton in Chicago on December 18, 1921 when the temperature was zero and played all but one minute against the Canton Bulldogs in a deluge at Cubs Park on December 11, 1921 as the Chicago Staleys football team won its first “world championship.”]

Jack Mintun married Delsie Chandler in 1924. When she passed away he married Avis Dunham in 1970. He was a deacon at Decatur’s Central Christian Church and active in the American Legion and other veterans’ organizations. He is buried next to his first wife in Decatur’s Fairlawn Cemetery. Mintun was the only one of nearly 40 Decatur Staleys to spend his entire working life in Decatur.