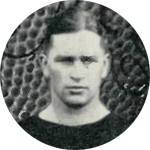 Three “Lanum” boys played football at the University of Illinois between 1910 and 1930 and all went by the name “Jake.” Older brother Harold played tackle in the pre-Zuppke days [1910-1912] and was on the 1910 team that shut out all seven opponents and claimed to have participated in the first Homecoming game in the nation. Younger brother Frank was a star quarterback at Decatur High School and then for four years at the U of I [1927-1930]. But middle brother Ralph is the only “Jake” to play on the 1918 U of I Big Ten Championship team, two years for the Decatur Staleys and three for the Chicago Bears.

Ralph was born near Carmi, Illinois to Lewis and Grace Lanum – who over the next 19 years moved the family to “South Town” in Chicago, and then to Urbana, Champaign and Decatur. Thus in 1912, Ralph played football in the last year of Thornburn High School in Urbana, then Captained the team at the newly constructed Urbana High School in 1913before he moved on to be named an All-State halfback at Champaign High School in 1914. Just as the 1915 season was starting his family moved to Decatur, IL where his dad became an executive for the Baird Harvester Company. When Ralph entered Decatur High School he was ruled ineligible to play and so immediately was recruited by the Decatur “Indians” club team as the Decatur Herald reported “the former Urbana and Champaign high school star may appear in the local lineup … in order to keep in training for his entry in Illinois football circles next fall….”

In 1916 Ralph entered the University of Illinois and played on the freshman football team. However, in 1917 he stayed in Decatur and at 165 pounds started in the back field for Millikin University along with future Staley teammates Sidney Gepford and Roy Adkins. Despite some academic problems, he finished the season as the team’s leading scorer with 66 points. In 1918, with many college men in the military, he won a football letter back at the U of I. Apparently Ralph was not cut out for the academic life and in the spring of 1919 was working in New Orleans. He came back to Decatur in the fall, played on the new Staley industrial league team and worked at the Staley starch factory as a “time keeper.”

In 1920 he became part of the first Staley professional football team, started 10 of the 13 games in the backfield with Dutch Sternaman and Bob Koehler and received over a $1200 bonus. In 1921 he stayed on the team and was used mainly as a substitute. Decatur sportswriter Howard Millard explained in the Staley Journal that “with an all star backfield it takes a mighty classy fellow to fill in this season when one of the others are jerked by Halas, but in Ralph “Jake” Lanum the Staley pilot has one of the hardest hitting backs in the game. Jake isn’t afraid to hit anything that wears a football suit while on defense and is one of the most valuable men on the squad.”

Over the next three years he played in 28 games for the Chicago Bears while supplementing his football earnings by working for Inland Steel Works in Indiana. He married Margaret E. Wolfe in January 1923. After his professional football career ended he worked mostly for oil companies while living in Hammond, Indiana. In 1959 he retired from the Cities Service Oil Company and moved to Homewood, IL. He passed away at the age of 71 in 1968 and was interred at the Assumption Catholic Cemetery in Glenwood, Illinois.